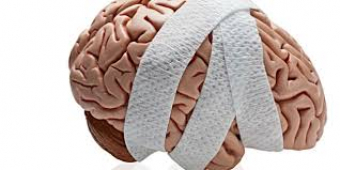 Acquired Brain Injury (ABI) is damage to the brain that occurs from a traumatic, or non-traumatic (illness) event.

"As incredible as this may sound, brain injury in Canada is a silent epidemic. In Canada, brain injury is the number one killer and disabler of people under the age of 44. Statistics further indicate that incidences are two times greater within the male population. Women take longer to recover from a brain injury .... More than one million people in Canada are living with a brain injury, and that number increases daily.  During Brain Injury Awareness Month this June, brain injury associations across the country are putting a face to this epidemic through posters, events, and social media, using the hashtag, #IamTheFaceofBrainInjury." (1)

Startling numbers, and the more research we do, and more diagnoses of things like "concussions" (aka mild Traumatic Brain Injury - mTBI), it is no wonder that traumatic brain injuries ARE a leading cause of death.

Is the importance and society impact becoming real yet to you?   Here are some more stats to drive the point home that Traumatic Brain Injuries (TBI) are no joke, and unfortunately not going away.

Our Physiotherapists Can Help

Our physiotherapy team are well versed and actively treat concussion symptoms, whether the acute/new stage, to delayed symptoms, to chronic impact mTBI can have on your function, participation, and performance.  We look forward to helping you get active, and feel great!

Dealing with a Winter Sports Injury? Prevention & Rehabilitation Can Help

Being physically active throughout the winter season can positively influence our physical and mental health. That said, a past or new winter sports injury can leave you sidelined. Today, our Stittsville physiotherapists discuss rehabilitation and physiotherapy options to treat and prevent these injuries.

How Physiotherapy Can Support Your Health This Winter

We understand if cold winter days have you making a beeline for the couch. But you were aware physiotherapy can play an important role in helping you manage pain and remain healthy this winter season? Our Stittsville physiotherapists explain how.

Have a question? Our team is here to help.